Dawn Ferguson is a Fort Worth native who loves this town and loves helping people.  She went off to Nashville to get her undergraduate degree from Vanderbilt University (BA in French ’04) and then returned to the Lone Star State where she got her legal degree from Texas Tech University School of Law in 2006.  While in law school, she interned at the Lamb County District Attorney’s Office and in her hometown of Tarrant County.  Upon passing the bar, she became a prosecutor with Tarrant County and began her career in criminal law.  She spent 12 years with the DA’s Office, starting in misdemeanor, then becoming a felony prosecutor in the 297th and CDC4.  She was a specialized prosecutor in the Special Victims Unit for almost 3 years before becoming the Assistant Chief of the 432nd District Court.  She has tried 50 felony cases and only lost 1.

Dawn joined the firm in 2019 and loves spending family time with her husband and 2 daughters. 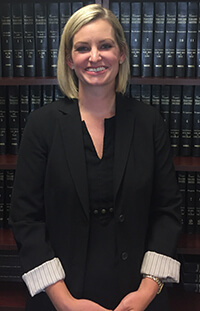